categories
Visit AtlasVPN
Back to home 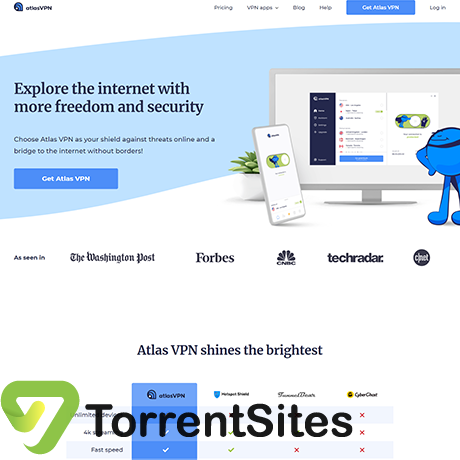 How many times have you wanted to watch some show on Netflix and it was not supported in your country? Well, the inhabitants of the 3rd world countries know this feeling way too well. However, there is always that option that lingers above the videos and other options on Netflix – “Are you using a VPN connection?” Well, that is a good idea! People use VPN connections every day and one of the biggest reasons is exactly Netflix.

However, if we decide to go into this VPN story, you will see that people use it for many different reasons. VPN stands for a “virtual private network” and it is great if you wish to stay hidden from everyone on the internet. It simply connects you to a different server anywhere in the world, it hides your IP address and thus makes you less vulnerable to hackers and leakage of precious information.

We know that the governments of our countries love to sniff around and to see what we are doing so a good VPN connection is going to put them off track. It is a popular way of using a safe internet connection and millions of people are using it. But, how to know if a VPN network is good, fast, secure, and reliable? Well, you need to read reviews like these. Of course, trying out every VPN in the world is not possible so you will need some time to find your best match.

Perhaps we can make that trip shorter for you and present you with a reliable, fast, and free VPN service called Atlas VPN. Atlas represents the whole globe of our planet which means that this VPN will connect you with many servers scattered across the world. Stay with us and see if this VPN is worth your time, efforts, and most importantly – money. Therefore, let’s put this VPN service under a looking glass and see its best options.

The first thing that comes to mind when using a VPN is the question – is this thing even legal? Well, in a bigger part of the world, using a Virtual Private Network is completely legal and many people do it. Of course, there are countries where such services are not supported so people don’t really use them. Therefore, the servers that you can expect on Atlas VPN and any other service like this are usually found in the countries where such services are reliable and legally allowed.

Atlas VPN is a relatively new VPN service that set its way out to dominate the world scene of such private networks. It came in hard and strong with many different features that you can use. First of all, you can download Atlas VPN from the Apple Store, Android Play Store, or the official website. The security it offers is fair and, like any other VPN service that has been tested and reviewed, it will provide you with a strong stealthy connection to whichever server you choose to be connected.

Also, one of the most important things when you choose a VPN connection is the speed. In most cases, the speed of your internet connection drops down drastically when you are using a VPN. With Atlas VPN, the speed of your internet is not going down drastically and, after performing a lot of tests, we could see that its speed is fair and it doesn’t drop below 40Mbps which is, you will agree, a fair speed for a VPN service. It doesn’t matter which server you are connected to, the speed will not drop below that border and your connection will stay fast.

On the other hand, if you have a fast internet speed like 200Mbps, you cannot expect such speeds on Atlas VPN or any other VPN for that matter. Usually, this service uses the IKEv2 protocol and the speed it supports is between 60 and 150 Mbps which is also a great deal. Therefore, when it comes to speed, Atlas VPN is a great choice.

When it comes to security, Atlas VPN guarantees the transparency of your data and connections. This means that your information, search history, and other data is not being stored on the servers of Atlas VPN and therefore you are 100% safe when browsing the net. Also, this information is safely hidden from any outside threats like hackers, governments, etc. It also has a smart kill switch that stops your internet activities for a while if it detects some breach of data.

If you wish to use Atlas VPN, you can do that in different ways. First of all, the main place where you need to go in order to get this service is its official website. It holds all the necessary information for you to see together with Frequently Asked Questions and a Blog page where you can learn more about this VPN and the perks of being its user.

Before using Atlas VPN, you need to choose what you are going to do. You can use the free edition of this service or you can become a premium member. We will first see the free account and then focus more on the premium choices for this VPN service.

Namely, in order to use the free service of Atlas VPN, you need to download it from Apple or Android Store or directly from the website. This service supports Windows, Mac, Apple, and Android operating systems and everyone can enjoy its performance. If you download it on your desktop or laptop computer, you will get an application which is of a simplistic design and it has options that you need.

With the free version of Atlas VPN, you are able to connect to three different servers. One is located in the Netherlands and two others are in the United States of America, New York and Los Angeles respectively. In order to connect to them, you just need to click on the server and let the app do the rest. We experienced no major drops in speed and functionality on each of these servers.

Therefore, as we have said earlier, Atlas VPN is newer but it knows its business. It is one of the rare VPNs that will offer such free servers and services without drastically changing the speed of your internet connection. So, the free version of it is great if these servers will do the trick for you. If they don’t, there is always a premium membership.

Usually, the prices are being reviewed at the end of a review, but Atlas VPN is a groundbreaking deal so we have to include money in the conversation right now. Usually, the VPN connections don’t always offer such affordable pricing points and you need quite a bit of money to be using it for the whole year. But, everyone, meet Atlas VPN! This service comes with the best pricing points we have seen in a long time. See for yourselves:

You can get three years of access to Atlas VPN for only $50.04. This means that the price is less than a dollar per month and it is fantastic. But, even more fantastic is what you get for this price. The free version of this VPN allows you to connect to 3 servers and the Premium version ads 700+ servers to that list. Also, the speed of the connection is increased when you go premium but we saw that the free connection speed is also fairly strong.

Also, Atlas VPN is optimized for Netflix, Amazon Prime, HBO, Disney+, and many more. Also, it allows unlimited 4K Ultra HD streaming on an unlimited number of devices. You can connect every computer and mobile device on Atlas VPN and your speed is not going to be affected by it. On top of that, it ensures data leak detection with 24/7 support and military grade encryption.

Premium Altas VPN is the right choice because it is cheap, fast, and secure. You can pay for it with your credit card, Google Play, PayPal, crypto payments, and Google Money. Also, it comes with a 30-day money back guarantee. This means that you can get your money back after a month if you are not satisfied with the service.

Next Level of Protection

Atlas VPN is a revolutionary VPN service with its newest feature called SafeSwap. It is the only VPN connection that has such a feature. Namely, SafeSwap is making your IP address change simultaneously in real time making the hackers and governments impossible to track you down.

It connects to several different servers and your IP address shifts from one to another and makes you uncatchable to the internet vultures, at the same time not affecting the speed of your connection. Since this is the only VPN service that has this sort of feature, it is surely on the right track to revolutionize the VPN scene of the world.

Atlas VPN is one of the best VPN services you can get out there. It is fast, secure, and it offers free services. The speed of its free servers are admirable and faster than a vast majority of other virtual private networks out there. Also, the premium membership is super cheap with having to pay only $50.04 for three full years of access to Atlas VPN.

It doesn’t limit the number of devices that you can connect and you can use it on your desktop, laptop, and mobile devices. If you want your connection to stay fast and to increase its security to a military grade level, Atlas VPN is the right choice. You can finally enjoy everything that you ever wanted on the internet.