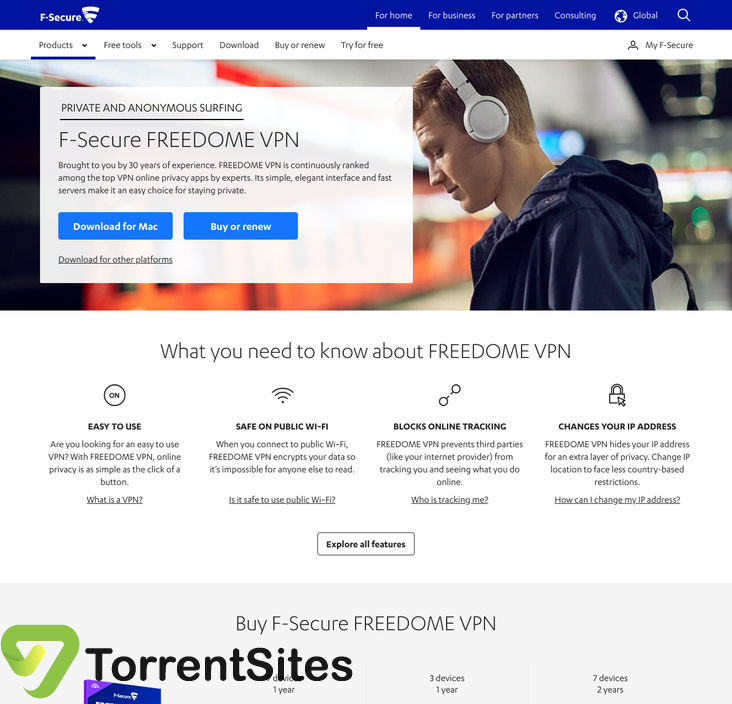 Finding the best VPN for torrenting is not quite as easy as it may seem. First of all, there are dozens of different VPNs to choose from (with new ones in development all the time). Secondly, just because a particular VPN is highly rated or very popular, that doesn’t necessarily mean that it is going to be the best VPN for torrenting, specifically. At the end of the day, some VPNs are simply much more P2P friendly than others.

Which is why I have chosen to compile a list of the best VPNs for torrenting on the market. Why waste hours scouring the internet and trying to figure out whether one service is better for torrenting than another when I can do that for you? Just visit TorrentSites.com for an easily and quickly accessible list of fully reviewed torrenting VPNs so that you can narrow down the list of options in no time.

F Secure: A Trusted Name in Cybersecurity for Decades – The VPN that I’ll be taking a look at today is, in fact, one of the most reputable and secure VPNs on the market, F Secure’s Freedome VPN. If you are looking for a private network that comes from a trusted name in the tech space – a name that has over 30 years of experience – then perhaps F Secure’s Freedome VPN is the right one for you.

There are some inherent issues, however, that people frequently take with F Secure’s Freedome VPN. For one thing, the service is not quite as features rich as other VPNs, especially when you factor in the cost (see more on both of these issues a little further down in this review). Secondly, F Secure doesn’t offer simultaneous use on as many devices as you’ll get when you sign up for other services, such as Cyber Ghost or Express VPN.

The most important thing to consider, though, is this: does F Secure Freedome allow users to torrent? Well, suffice it to say, this is certainly not the most torrent friendly VPN out there. But we will get to the specifics of all of this in due time. For now, let’s take a look at where F Secure comes from and how they have grown into one of the most trustworthy tech security companies in the world.

When F Secure was founded, it was originally called Data Fellows. The company was created by Petri Allas and Risto Siilasmaa on May 16th of 1988. In the beginning stages, Data Fellows only trained computer users and created customizable databases. It wasn’t until 3 years into the company’s operations that they launched their first major software, developing the first ever heuristic scanner for use in antivirus programs.

Data Fellows launched their first original antivirus software for Windows operating systems in 1994. They did not rebrand to F Secure until 1999. Once they did so, though, the innovation did not slow in the slightest. F Secure became the first company to develop anti-rootkit technology (called Black Light), which went to market in 2005.

From there, F Secure began its path of company acquisitions. In June of 2015, for instance, they broke into the enterprise market when they acquired Danish security consultation company, nSense. Continuing their growth in the cyber security space, F Secure bought Italian owned Inverse Path, which was known for providing excellent security consultancy services in the avionics, automotive, and industrial control spaces.

In 2016, F Secure’s Client Security received the AV Test Best Protection Award for the 5th time. And today the company is also at the top of the VPN market, thanks to their Freedome service. F Secure has a long list of cyber security tools available for consumers and businesses. But let’s take a look at this tech giant’s VPN service and see whether it deserves to be in the running for the best VPN for torrenting, shall we?

F Secure’s Freedome VPN offers a fairly typical design for such a software. That is to say that F Secure is minimalistic, extremely user friendly, and one of the easiest to use apps that you will ever see. There honestly isn’t a whole lot to say about F Secure’s design because, well, there isn’t much to it.

When you load F Secure VPN, you will be greeted by nothing but a pleasant blue background and a power button. Simply click “On” to begin encrypting your data and protecting your privacy. It really is as simple as that, believe it or not. As is the case with most VPNs, F Secure also allows you to select from a menu of various server locations, which can be used strategically to bypass internet restrictions (such as blocked websites, country specific streaming libraries, and more).

It doesn’t get much more stripped down and simplified as F Secure. The user experience is undeniably smooth, thanks to a sleek, clean, and intuitive interface. With the click of a button, you can start enjoying true online privacy immediately.

This is where F Secure VPN gets criticized often. Compared to other VPN services on the market (in the same price range), F Secure doesn’t give you a lot in the way of features. It encrypts your data, of course, and does everything you would expect a baseline VPN to do … but, unfortunately, that’s kind of where the list of features ends.

As far as torrenting is concerned, F Secure Freedome would definitely not be my first choice. Torrenting is technically considered to be “limited” on F Secure. However, when you look at some of the company’s official statements on torrenting, it begins to appear as if “limited” actually just means “actively discouraged.”

On F Secure’s FAQ page, the company goes out of their way to cite the Digital Millennium Copyright Act (DMCA) as a main reason behind their anti-torrenting stance. “We are not able to support BitTorrent or other peer to peer file sharing applications on many of our gateway sites,” F Secure writes, “which either reside within the United States, or are hosted by a company based in the US.”

As you can imagine, this leaves you with a much shorter list of torrent friendly servers than your average VPN will provide. So, if you live in the US and want the fastest connection possible for fast download speeds (the one that is closest to you), you may want to pass on F Secure.

Their hardline stance against torrenting, however, doesn’t even stop there. When F Secure detects users trying to download torrents over their US-based servers, they will even go so far as to restrict your network access via a firewall! This can disable your network access for up to several hours, believe it or not.

However, it is worth noting that this policy only applies to US servers … still, though, I personally prefer patronizing companies that are not actively anti-torrenting. But, hey, the choice is yours.

Device accessibility is one more drawback to F Secure. The Freedome VPN offers a much slimmer list of compatible devices than many of the industry leaders. Whereas most VPNs allow use on all computers (including Linux), all mobile devices, and usually most smart TVs and gaming consoles, F Secure only covers the bare minimum.

Freedome can be used on Mac, Windows, iOS, and Android. That means you won’t be able to protect your data and privacy if you use Linux, or over your smart TVs, Xbox, or PlayStation consoles. This is, in my opinion, unacceptable.

It gets worse for F Secure, though. The baseline number of simultaneous connections that one can have is 3, which is one of the fewest on the market. You can pay extra for up to 7 connections at once, but who wants to do that? Considering for a moment the fact that most VPNs offer a minimum of 7 simultaneous connections (for cheaper) and that some offer an unlimited number, and it becomes clear that F Secure’s Freedome is not the most cost effective choice.

F Secure, for being so devoid of features and actively against torrenting, is also quite pricey. The pricings and plans for F Secure are as follows:

Although at first glance it may appear as if F Secure is on the cheaper side (for the 3-device plan), you have to remember that, when it comes to features, accessibility, and P2P friendliness, you get what you pay for (arguably less in this case).