categories
Visit HideMyAssVPN
Back to home 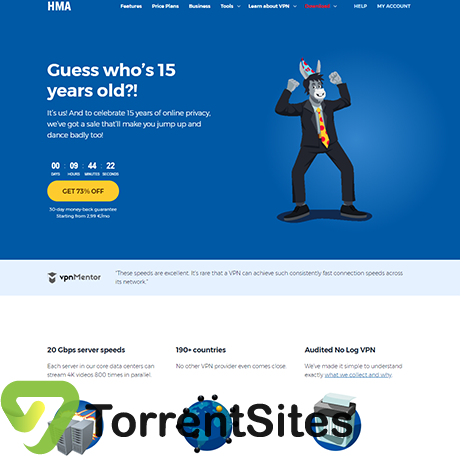 Thank you for voting, we value your feedback!
2/5 User rating

The internet is not always a fun and helpful place. No doubt, the internet is nothing short of a miracle which has certainly improved society and our personal lives, but it has also opened up Pandora’s box when it comes to dangerous possibilities. For every bright and shining marvel that the internet has created, there is a shadow, too, lurking behind it.

One such shadow, of course, comes in the form of the hacker. Without a fully private and encrypted internet connection, none of your data is secure. Anyone with enough tech savvy can access your social security number, credit card info, address, and anything else they may desire. If it has been transmitted over an unsecured internet connection, you should assume that it can be seen and exploited.

It’s not just the hacker we have to worry about, though, especially for those of us who torrent. Even your ISP can (and does) track everything that you do online.

The third major player in the war against internet privacy is your very own government. It doesn’t matter where you live, almost all governments conduct some form of data mining and spying on their citizens. Sometimes it is in the name of protection or self-defense, sometimes it is just an authoritarian move to control, censor, and silence. Whatever the case may be, one thing is for sure: Big Brother is alive and well in 2020.

There is one way, though, to take back your online safety, autonomy, and freedom. And that is with a Virtual Private Network (VPN). Whether you want to be able to download torrents without being harassed by your ISP, keep the prying eyes of would-be hackers at bay, or work around your government’s internet restrictions and Orwellian tendencies, a VPN for torrenting is the way to go. As a matter of fact, if you are torrenting without a VPN, please stop what you are doing right now and find the right VPN for you. You’ll thank me later.

There is a long list of VPNs for torrenting, though, on the market to choose from. This is why I am here to break each of the best VPNs down for you, so that you can make the most educated decision when it comes time to subscribe to one. I am excited to share today’s VPN with you because it is one of my favorites.

Not only is HMA a great VPN for torrenting due to its fast download speeds and vast array of server locations, but it has one of the coolest backstories of any VPN service, too. Not that a company’s history is necessarily a make or break for their products, but it can be both enlightening and interesting to know where a certain software came from, right? At the very least you can discern whether the brand seems in alignment with your values and personal tastes.

HMA was created in 2005 by a 16-year-old kid from Norfolk, England. Jack Cator simply created a proxy VPN so as to access restricted music and gaming websites at his school (you know, as one does…). Cator claims that the first version of HMA was up and running in a matter of a couple hours, created with open-source code. This primitive version of the now-colossal VPN was a free proxy site wherein users typed the URL they wished to have access to.

HMA – which originally stood for Hide My Ass – may have begun as a small-scale, free proxy site, but it grew into something Cator himself never could have predicted. Everything about this company’s early growth was independent and crowdsourced. Early advertisement, for instance, was done by Cator himself via online forums. Eventually, it was featured on the front page of Digg.

Once HMA hit the 1,000-user mark, Cator began incorporating ads to make some money off of his efforts. HMA refused capital venture funding, but it was making a couple thousand dollars in profit each month, putting Cator through college (where he studied computer science). By the time 2009 rolled around, though, Cator decided to drop out of college so that he could focus on HMA full time, adding a paid VPN service to the mix.

The majority of HMA employees in the company’s early stages were freelancers Cator found on oDesk.com. In 2012, one of HMA’s freelancers created a competing company. In response, HMA went legit – they hired all their freelancers as full-time employees and established a physical office in London.

Today, HMA is one of the most trusted, reputable, and popular VPN platforms on the market. It has received its criticisms over the years, but so has every software. Nonetheless, when it comes to finding the best VPN for torrenting, HMA is definitely worthy of consideration.

I love HMA’s intuitive and user-friendly interface. There really isn’t much to it at all. Just click “on” and quickly become connected to the strongest, fastest private network server available. You can also choose a specific network from HMA’s long list of thousands of encrypted servers from all around the world.

HMA offers plenty of top-notch features for torrenting with a VPN. Although, unlike other VPNs out there, HMA does not have dedicated servers for torrenting, there is still much to love about this one. Features include:

Military-Grade Encryption – HMA boasts on their website that they use the highest encryption standard available today: 256-bit AES. They also have fully encrypted servers, DDoS protection, and leak prevention. If you are serious about your privacy, HMA VPN is one of the most secure that I have ever seen. This is reinforced by their strict no logs policy, which has been audited to satisfaction. When the UK authorities asked them for logs related to an infamous Sony hack, they were of no help (because they had none to provide).

Thousands of Servers Across the Globe – Few VPNs for torrenting come close to offering the same scope of servers and server locations as HMA. With servers in 290 locations (190 different countries), HMA can open the world up to you. HMA offers over 1,100 unique VPN servers for you to choose from, making it one of the largest VPN services in the world.

Cross-Platform Accessibility – No matter what device you happen to be on, HMA keeps you protected with one of the most versatile lists of device compatibility on the market. Whether you are using a PC, Mac, or Linux computer, HMA will work for you. Plus, enjoy privacy and protection on your iOS and Android devices, PlayStation or Xbox, and Apple or Android TVs.

Normally, an HMA subscription allows you to use up to 5 devices simultaneously, but you can use 10 if you sign up for the family plan.

Does HMA offer Fast Download Speeds? – This is actually something that is a bit contested. HMA claims that they offer 20 Gbps connection speeds (which should be nearly instantaneous), but critics have called speed into question when reviewing HMA in the past. A 2016 review of HMA, for instance, in PC Magazine praised the service for its user interface but listed its slower upload and download speeds as a main issue with it.

It is totally possible, however, that HMA has remedied their speed problems of the past. Still, I felt that this was something you should know when making your decision.

As I mentioned before, HMA is fully streamlined across any device – desktop, mobile, TV, console – they even offer VPN routers. No matter what device you are using HMA on, I have no doubts that you will be greeted with an intuitive, user-friendly interface that makes instant online privacy as simple as it should be.

HMA is not the most expensive VPN for torrenting on the market. It is also not the cheapest. For the surprisingly low number of advanced features that HMA offers (comparatively speaking), I would expect the service to be slightly cheaper … but you won’t be breaking the bank with HMA by any means. Here is the pricing breakdown:

They also mention 2 additional plans: a family plan and HMA for business, but I was unable to find the pricing on either of those.

Likes & Hates:
Thousands of servers from hundreds of countries
Some of the strongest encryption available
Very user-friendly interface
Multi-platform accessibility
Great customer support
Speed is questionable
A bit pricey
Maybe not the best VPN for torrenting in the world