categories
Visit SurfShark
Back to home 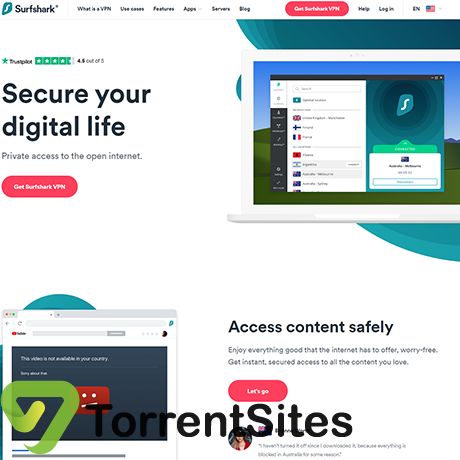 There are a lot of VPN services out there that are all talk. Many of them claim to be the best VPN for torrenting, streaming, and any other online activity. But not all of them can back this claim up. It is not uncommon for a VPN’s claims to be proven false. It has happened time and time again, with reputable and respected VPNs such as Cyber Ghost and others.

Most of the features that VPNs boast are fairly easy to test. Some of the claims, though, such as when companies say that they have strict no logs policies are a bit harder to prove. The only way for you to know for sure is when a VPN company has their servers audited, or when a government seizes a server as a part of an investigation – a true no-logs VPN would have no logs, no shred of evidence, to show.

When I first came across Surf Shark, I was immediately impressed by its sleek and professional branding. The slender white “S” cut into an aquamarine shark tooth really makes Surf Shark’s logo stand out among the crowd of VPNs out there.

Surf Shark’s great marketing and brand positioning, however, does not stop there. In addition to the cultivation of a popping and fresh brand image, Surf Shark says all the right things. Their website, for instance, compels you to “Secure your digital life” and “Access content safely.” But is Surf Shark, in fact, the safest VPN for torrenting? What can Surf Shark VPN back this up with if anything?

Most importantly, is Surf Shark the best VPN for torrenting? Does it offer great speeds, thousands of server locations, leak protection, and everything else that we look for in our VPNs? Some VPNs even have dedicated servers just for torrenting or streaming. Does Surf Shark go to such extremes to make their service as P2P friendly as it could be?

There is only one way to find out. I downloaded Surf Shark and tested it out just for the purposes of this review. In order to know whether Surf Shark is worth your hard-earned money, let’s dive in and take a look at everything that this VPN service has to offer, shall we? Let’s take a good, hard look at Surf Shark VPN.

Again, I can’t stress enough how much I love the whole aesthetic of this VPN. It is light, fun, clean, and original. This goes beyond just Surf Shark’s great marketing, though, and bleeds into the actual design and interface of the VPN software itself. The program is sleek, intuitive, and extremely user friendly.

Surf Shark employs a somewhat standard VPN interface. So, if you have used a VPN before, this should be very familiar. However, even if Surf Shark ends up being your first VPN, it is so intuitive that you’ll be enjoying fully private and encrypted web browsing instantly.

Once you install Surf Shark, open it up, and click “connect.” That is literally all there is to it. If you want to choose your server location, you can, but if you just want to connect to the strongest encrypted connection near you, all you have to do is click the “on” button.

You couldn’t ask for a more intuitive, sleek, and aesthetically pleasing VPN experience.

Here is where we will really get to know what Surf Shark is all about. There is so much to love about this VPN for torrenting. First and foremost being the fact that Surf Shark is, out of the box, P2P friendly. This may seem like a given, but you’d be surprised how many VPNs have specific protocols that limit torrenting or, worse, make it so that you cannot download torrents. So, just as a baseline, it is good to see that Surf Shark is a torrent friendly VPN.

Upload and Download Speed – Another thing that makes Surf Shark one of the best VPNs for torrenting is its lightning fast download speeds – some of the best in the space. Surf Shark, time and time again, performs well in speed tests, providing a download speed percent change of 28.3%, one of the lowest of all VPNs (lower is better). Remarkably, too, Surf Shark scored an unthinkably low 4.5% on an upload speed percentage test while competitor VPNs often were clocked at between 40 and 64% (again, a very good thing for Surf Shark).

In short, if you want a lightning fast VPN for torrenting, Surf Shark is one of the fastest there is.

Unlimited Devices! – That’s right, ladies and gentlemen, Surf Shark lets you protect your data and achieve peace of mind on an unlimited number of simultaneous devices. Hallelujah! This is almost unheard of in this world of VPNs. Most of Surf Shark’s competitors have some sort of limit. Cyber Ghost, for instance, only allows for 7 simultaneous connections. Express VPN is a little more generous (but still limited) in that it allows for 10 simultaneous VPN connections. Surf Shark, however, gives you infinite.

Pair this with an impressive list of compatible devices and you have the makings of one of the best VPNs for torrenting and streaming possible.

Wide Array of Cross-Platform Accessibility – From PC to Mac to Linux; from Android to iOS; from Fire TV to Apple TV to Smart TV; from PlayStation to Xbox; from Chrome to Firefox extensions, you can make sure that you are never without privacy and top-notch encryption with Surf Shark. Sure, Surf Shark is a great VPN for torrenting, but why stop your protection there? Take encryption and anonymity with you no matter what device you are on, whether you’re watching Netflix or playing Call of Duty while your torrents download in the next room. Surf Shark’s got you covered all the time.

Thousands of Servers, Plenty of Locations – Being able to choose from myriad servers is an asset for the best VPNs because it means that you will be more likely to find a server closer to your home or nearer to where you are while traveling. Plus, it means that you will be able to completely open up the internet to be a more global experience. The more countries that a VPN has servers in, the more foreign Netflix and Hulu libraries you have available to you. Open up the web with Surf Shark VPN’s 1,700+ servers in 64 different countries.

Novel features like Ad Block and White Lister –Surf Shark promises an online browsing experience that is free of ads, malware, and phishing attempts thanks to a built-in ad blocker (that is actually quite powerful). The VPNs white lister feature, too, is clever and useful. Unfortunately, not every website allows the use of VPNs.

Quickly whitelist a website so that you can visit it whenever you want in the future without having to disconnect from your VPN entirely – keep your data private everywhere else (for instance, if you are seeding or downloading torrents) while automatically having it disabled for the one terrible anti-VPN site in question. Everyone wins.

Strict No Logs Policy and Top-tier Encryption – Believe it or not, not every VPN claims to offer a strict no logs policy. Some services very openly do log your data (more often than not it is simply hardware information, but still…). If you want ultimate privacy, though, you will want a VPN that openly says that they do not keep any logs whatsoever of your content. Surf Shark is that VPN. It also offers a camouflage mode so that your ISP won’t even be able to know that you’re using a VPN, making it ideal for citizens of more oppressive countries.

The Surf Shark app, whether on Android or iOS, is every bit as clean, intuitive, and awesome as the desktop app. No matter what device you are using, Surf Shark offers an incredible user experience.

In the past, one of the biggest criticisms with Surf Shark was its price. It seems as if they have heard this criticism, however, and addressed it. At the time of this writing, the price of Surf Shark seems right in line with its impressive numbers and performance ratings (relative to the average price of a VPN), in my opinion. The plans are priced as follows:

Although I don’t love the huge price jump between a half-year and 2-year commitment, if you are willing to get the 24-month plan, $2.49/month is, I think, a very reasonable ask for everything that Surf Shark provides.