categories
Visit CyberGhost
Back to home 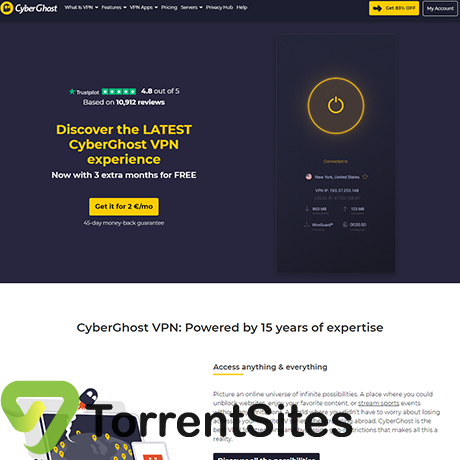 When it comes to finding the right Virtual Private Network (VPN) for torrenting, there is no shortage of options from which to choose, that is for sure. It seems like every other week I hear about another VPN service being released, being added to the already sprawling list of VPNs that exist. Few of these privacy services, though, has anywhere near the same level of brand recognition and reputation as Cyber Ghost.

Maybe you have come across Cyber Ghost in your research already. Cyber Ghost is one of the most successfully advertised and well positioned VPN services on the market. It appears on just about every list of the best VPNs that I have ever seen. And it is one of the all-around most affordable VPNs out there, based on what you get in exchange for its deep discount prices.

If you are anything like me, then you were lured in by the company’s quirky and brightly colored imagery. Their icon is, well, iconic – the yellow circle with a little wonky black ghost in the center. What can I say? … I am just a sucker for good marketing, I guess. Although it isn’t always the case, in my experience, a solidly marketed and branded product usually equates to a high-quality product. Again, there are certainly exceptions to this rule. But when a service has as novel and well thought out a brand identity as Cyber Ghost, I am inclined to see what all the hype is about.

In the case of Cyber Ghost, once I signed up for the 30-day money back trial period, I saw that the solid marketing of this brand did, in fact, have an equally solid product behind it. There is so much to love about Cyber Ghost. Whether we are talking about its extremely user friendly and intuitive interface, its cross-platform accessibility, its vast array of private servers located all around the world, its lightning fast download speeds, or its reliable and ever-ready customer support. Cyber Ghost proves, time and time again, that it is truly one of the best VPNs for torrenting that is available today.

Cyber Ghost is a user and critic favorite. But has this always been the case, or did this VPN platform have to work out some kinks at the beginning? Well, let’s delve into Cyber Ghost’s history momentarily and see if there are any blemishes on their record that are worth noting.

So, one of the biggest criticisms of any VPN usually comes in the form of how truly anonymous these services are. Cyber Ghost, as any VPN would, goes out of their way to provide a sense of security in their customers (or would-be customers).

They have released countless official statements that have said things to the tune of, “we don’t track user web activity … we don’t collect or store any data … you surf instantly undetected … No ISP, website, or government can track your digital footprints! … Prevent tracking: Enjoy online surfing without fear of hackers, mass surveillance and recording your network habits.” All quotes, by the way, were taken from various official Cyber Ghost publications.

These claims are backed up by Cyber Ghost’s willingness to be subject to independent organizations and civil rights investigations, to be checked for compliance with these statements. Although I cannot speak as to whether any independent civil rights organizations have taken them up on this invitation, I can say this: Cyber Ghost has been accused of sending data to multiple companies in the past.

Cyber Ghost has been accused of sending data to AppsFlyer in San Francisco, Google Analytics, Google Crashlytics, Google Firebase Analytics, Mixpanel (San Fran), and Instabug in Cairo. The biggest controversy here is the fact that Cyber Ghost sent this data without asking the user. The good news, however, is that the data sent is not of actual browsing history or internet activity. The data that was sent mostly concerned hardware being used.

through this data transmission (which, mind you, cannot be turned off).

I think that this is something Cyber Ghost will have to speak on, and hopefully rectify, soon. If this company hopes to continue being one of the top names in the VPN industry, that is.

One of the things that really blew me away about Cyber Ghost was how intuitive and easy to use it was. From the moment I’d installed the software, I’d mastered the program. No matter what kind of experience you have with VPNs, anyone can figure this one out in no time. It’s one of the most basic layouts that I have ever seen. Other than a simple power button to connect or disconnect to a VPN server, there is little else to it. Cyber Ghost is simplicity at its finest.

I also like that just below the connect/disconnect power button, there is a dropdown menu of server locations for you to choose from. You can select from a list of recent servers or strongest connections, or you can type in a location and find a server in a specific country (this makes strategic streaming a lot easier). Other than that, everything on this app is as straightforward as it can be.

I do have a few gripes about the desktop version of the software, though. Maybe this is different on different Operating Systems, but on Windows 10, I seem to be having some alignment issues. Instead of appearing as a large-scale expandable standalone program, the desktop version of Cyber Ghost functions more like a tray menu, limited to only the bottom right-hand corner of the screen. As you delve further into the program (advanced menus and settings), there are portions of text that cannot be read. I would expect this to be corrected (I hope) in the next update.

One of the criticisms of using VPNs for torrenting that I hear often, one of the biggest complaints, is that people say the VPN slows download speeds too much. I did not have this experience. I did not notice a throttling to my torrent downloads at all. Nor did I notice any change in my buffer speeds. Connecting to Cyber Ghost, performance wise, made no difference whatsoever – which is exactly what you want from a torrenting VPN.

Cyber Ghost offers hundreds of anonymous servers from hundreds of different locations around the globe, all of which will encrypt your data and leave you 100% anonymous, untraceable, and safe when torrenting (or doing anything online). With no bandwidth limit and blazing fast speeds, Cyber Ghost might just be the best VPN for torrenting that I have ever seen. At the very least, it makes the top 5.

Sign up today to receive full VPN protection for 3 years at only $2.25 per month. Although you have to pay in full upfront, still, this price cannot be beat for everything that Cyber Ghost has to offer.

Thankfully, you can access Cyber Ghost on just about any mobile device. With both an Android and iOS app available, you can know that you are protected and encrypted when you browse on your phone or tablet as well. The Cyber Ghost mobile app is even more intuitive and user-friendly than the desktop one, too, offering a streamlined and seamless cross-platform experience that most tech companies can only dream of.

Unfortunately, you have to be connected to WIFI for Cyber Ghost to work … but this is not really a complaint with Cyber Ghost specifically. The technology is not quite there yet to be able to encrypt and anonymize data sent over cellphone carriers (and I can’t imagine that the likes of AT&T or Verizon are going to let that happen without a fight either).

However, for now, Cyber Ghost functions and performs just as incredibly as a VPN for torrenting whether you are on your Mac Book, HP, iPhone, or Galaxy.